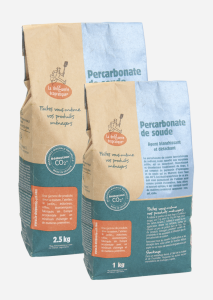 Also called solid hydrogen peroxide, sodium percarbonate (Na2CO3.3H2O2) is made of sodium carbonate (soda crystals) with hydrogen peroxide (called oxygenated water). Originating from common raw materials such as salt, water or chalk, its constituents are all natural. Once percarbonate is dissolved in water, it dissociates in:

This product does not contain any chlorine and phosphate which are harmful substances for rivers.  Because the percarbonate is not bio-cumulative, its environmental impact is reduced. Already used in many laundry detergent of the market as very efficient whitener, percarbonate supplies oxygen and acts as stain remover in order to dissolve rapidly and totally all kinds of stubborn stains (such as tea, coffee, red wine, grass, fruit, perspiration, blood, etc.). Sodium percarbonate is ideal to preserve naturally the whiteness of your textiles even after numbers of cycles: it avoids clothes from greying because of limescale.
Regulatory information: dangerous, please follow condition of use.

Percarbonate is used for numerous other purposes. Click here for more information.

<  Back to « Powders and basic products »